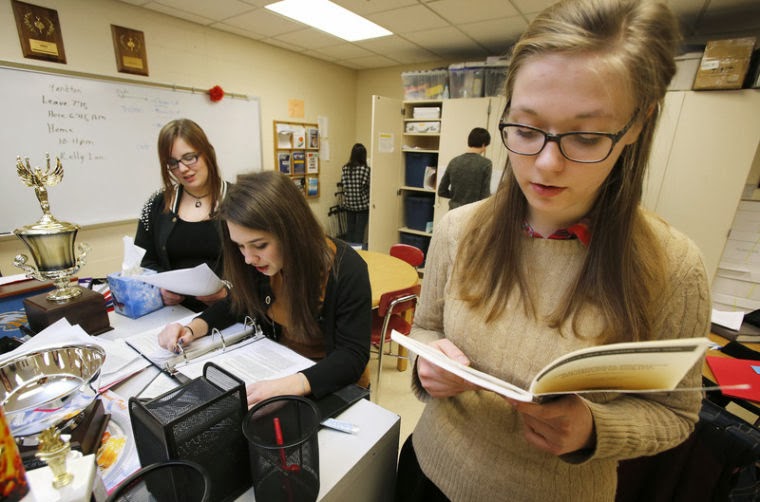 Living in a different country for the first time and adding a language barrier can hold challenges of its own, but three foreign exchange students have decided to use the opportunity to the fullest. They have joined the Aberdeen Central Debate team to sharpen and expand their English skills.

From Russia, Ukraine and Germany, the three girls have been placed in Aberdeen for the school year and are juniors at Central.

“It was a big culture shock when I first got here. The food, the people, the time change, the lifestyles and mentality, even the houses, everything is different here, and when your first arrive, you’re exhausted. I didn’t even realize I was in America right away,” said Masha Melnyk, 17, from Kryvyi Rih, Ukraine. “When I came to school, it was a lot easier. I got into some classes and then debate, and became busy so it was hard to become homesick.”

The girls all began learning English in their countries in grade school, but since actually living in America, have been able to gain confidence in their English capabilities, particularly through debate.

“I feel like I am improving my English since I have joined debate. It’s very, very helpful,” said Ekaterina Milovanova, 16, from Tambov, Russia. “I am kind of a shy person, so debate has really helped me get out of my box.”

She said she also has been learning the differences in programs of debate it America versus back home.

“What we do in Russia, we basically just argue with each other but here, there’s a system and a process to it,” Milovanova said.

With the help of their coach and team members, the girls have become much more comfortable speaking English and two of them said they even have dreams in English, which tells them they are becoming very fluent.

“A lot of times in Russia, I was afraid to speak English because I may say something wrong, but now I can just say it,” Milovanova said.

Elisabeth Pohle, 18, from Erlangen, Germany, also participates in one-act-play, and said debate has helped her become more fluent in English.

“It has helped a lot to just have more words and it has also helped me be able to speak more professionally and just not being afraid to speak even if the text is more complicated to understand,” she said. “I understand English way better now, even when watching the news I can understand political topics.”

Pohle chose to be an exchange student in this area because her mom’s cousin lives in Grand Forks, N.D.

“I never really met him, but I heard a lot about it. They tell you it’s better to go to the Midwest, you get more of the real American experience. It’s a huge difference to Germany, here, they’re all so friendly, it’s so crazy to me. I think ‘how can you be so polite all the time?’” she said with a giggle.

Debate not only presents challenges in dialogue, the topics can also be challeging. b

“They have to put in a lot of extra time and do some research, because, for instance, talking about our court system, they have to start from square one because they’re not familiar with it,” said Kerry Konda, head debate coach.

“To get familiar with the topics has been challenging,” Pohle said. “Getting into how the whole voting system works was really hard for me.”

But they have overcome the barrier and are continuing to learn and grow.

“When I first came to debate I was really nervous. I thought I couldn’t do it,” Milovanova said. “But the very first time I competed, I was very proud of myself. I thought ‘yes, I can do it. Now I can do everything else.’”

After this experience, Milovanova said she will be much more independent, even when she goes back home.

Melnyk, who was encouraged to try debate by her fellow teammate and house sister Kallie Marske, said the best advice she was given was to try, even if she gets discouraged during practices or reading.

“It helps in life a lot, because now every time I have small little challenges everyday, I just try, and if I don’t succeed that’s fine, but at least I know I tried.”

Milovanova and Melnyk compete as a team in public forum, which is rare. Usually foreign exchange students are paired with American students.

“They’ve shown their capabilities and they work really well together. You try to put teams together that compliment each other and they do just that,” Konda said.

Konda said this is the first time that the team has had three exchange students since he started coaching six years ago.

“They also bring a different perspective to our team, talking about politics with Russia and Ukraine, we’re getting a life look into that,” he said. “We learn a lot with each exchange student that comes.”