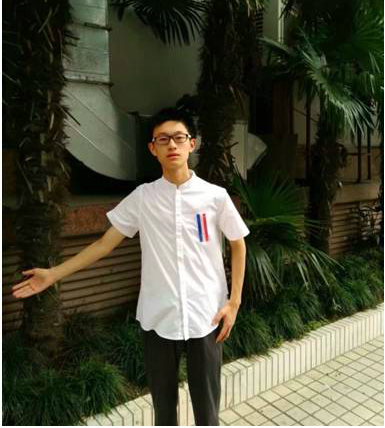 Some people may tell you that debate is all about hard work and preparation. I somewhat agree but I can assure you that understanding the resolution intuitively is the key.

Coach Cale and Serena could explain and demonstrate the resolution clearly and help us grasp the essential part with their own words:

“Debate isnot a sprint, it is a marathon.”

When I first got into IB center, I was too young, too naïve. The glory that I had got in middle school like being the former Chairman in the student government in Ningbo Foreign Language School and the “Star of Ningbo Foreign Language School” made me think that Debate would be really easy for me. Bearing that in mind, I actually didn’t prepare much and got to the contest with very little evidence, and I failed.

I felt frustrated, and for the first time in life, I felt the experience of losing.

Just at that critical moment, It’s Cale who encouraged me, and said“You are a brilliant guy, don’t be so hard on yourself. With practice, guys like you could sooner or later get rewards.”

I researched about a week, and then entered another regional tournament, which was quite tough for novice debaters like us. My opponents were all experienced debaters from Beijing. During the rounds, my partner and I tried to catch every single word they said, and we did it.

Little by little, our experience grew. I began to be unsatisfied with my current certificates and trophies as the next resolution arrived.

To be better prepared, I participated in theNingbo Enreach Warmup Tournament, and luckily I was the champion and also was atop speaker.

Because of that, I got familiar with thetopic, and could deliver the message of our team freely. I was a regionalquarter-finalist, and qualified for the national debate championship.

Now, the 5thNSDA National DebateChampionship has finished, and I successfully broke and made it to Triple Octafinals in the high school division.

Don’t be afraid of debaters from Shanghai and Beijing. My experience shows that we can defeat them, native speakers are tough to deal with, but we can defeat them by pointing out their logical fallacies and attack their evidence.

For example, in this national debate championship, after the elimination round, RDFZ gave us amazing evidence. I doubted their evidence’s credibility, because after researching thousands of articlesI never seen such supporting details. So I firmly questioned their evidence using our prep time, and sure enough, they changed the meaning of the evidence.They hid the small countries’ name Chad, and used it to illustrate the whole sub-Saharan African region. In the summary speech, I reinforced the credibility of evidence in both sides, and judges of the round nodded in agreement with me.

I still have two more years to pursue the title of national champion, the marathon continues.

Last but not least, thanks Serena and Cale for supporting me.